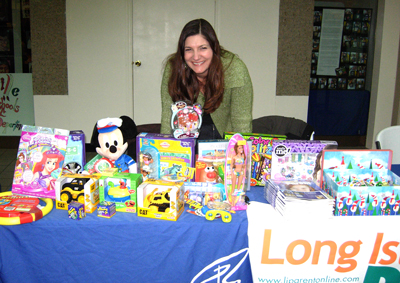 At just 17, Liza N. Burby was the youngest assistant editor at the Queens Tribune in New York when she was a college freshman. Two summers later, she was managing editor of three weekly newspapers in Nassau County, NY. In both jobs she learned what it takes to assign and edit articles quickly. She also learned she didn't want to work as an editor for weeklies when she graduated.

Instead, Liza went into the magazine world where the deadlines were monthly. From there she progressed to book publishing where she learned the art of trafficking—or managing all stages of production on more than 100 books at a time. And she loved the challenge. She also enjoyed working with authors and artists to help them produce the final products.

In 1999 she was offered the role of founding editor of Newsday’s Parents & Children Magazine, and when Newsday closed their magazine division in 2008, Liza decided it was time to launch her own company, Wordsmiths Media, LLC, and publish Long Island Parent magazine and www.liparentonline.com. She sold her magazine and site to Davler Media Group in 2012, and served as a contributing publisher until 2014. She then had the opportunity in 2014 to go back to her weekly newspaper deadline days and became editor-in-chief of Anton Media Group, where she handled 17 newspapers a week, 8 magazines, and 13 websites. The experience of all those years ago turned out to be handy. Since then, in addition to writing children’s books, Liza has been a project-based manager, executing editorial products from concept through publication. Clients include Working Mother and New Jersey Family magazines, Stony Brook University, Expos Your Business, Queens Chamber of Commerce, Island Federal Credit Union, Blank Slate Media, Handy Laundry and KGG Enterprises.

As a result of her diverse background, Liza knows all aspects of publishing, from start-up tasks to distribution and printing, organizing and holding events, advertising and managing a large staff, and even graphic design (though she admits she has a better eye than hand, so relies on the artists to do the actual work). Each role she has served, from that first one as a teenager until now, has helped prepare her for the next.

Photo above: As publisher of Long Island Parent magazine, Liza organized numerous events for the Long Island community, including two special needs fairs and three camp fairs, and she partnered with organizations such as the Juvenile Diabetes Research Foundation, Mothers Against Drunk Drivers, the Girl Scouts and the National Association of Mothers’ Centers. This was a Toys for Tots Christmas collection at the Broadway Mall in Hicksville.

As editor/publisher, Liza serves in numerous advisory positions, including:

• Board Member of Child Care Council of Suffolk County

• Advisory Member of the Parenting Institute at Adelphi University